The effort to save modern society from energy crisis and environmental pollution has been made for years with challenges and hopes mutually emerging. Nowadays, advanced technology can convert nuclear, wind or solar energy into electric energy with cleaner process and higher efficiency. Lithium-ion (Li-ion) batteries as a source of alternative energy respecting the environment through the use of renewable energies have been proposed in industries for innovative application. Li-ion batteries are the batteries of choice for portable consumer electronic devices including cell phones, tablets, laptop computers, digital cameras, power tools, and toys, due primarily to their durability, high specific energy, and ability to operate at reasonably high power. Recently, Li-ion batteries have begun to enter the automotive market as power packs for hybrid and fully electric vehicles. In addition to the high specific energy, the automotive market also benefits from this chemistry’s high power, efficiency, and long cycle life capability. As the automotive market drives the expansion of Li-ion production, these batteries may also enter stationary service as well, facilitating the implementation of renewable energy technologies such as solar and wind. 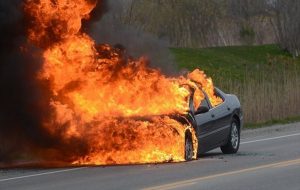 However, although these batteries have become quite common for consumer market applications like cell phones or laptops, the widespread use of this technology for emerging markets like electromobility or smart grids requiring stronger energy and power capacities must be examined from a safety point of view. Compared to many other battery technologies, Li-ion is less thermally stable, and many accidents happened before. If the cell temperature is increased beyond a certain threshold, a thermal runaway can occur, resulting in a rapid temperature increase and possibly other related adverse effects such as the release of gas and smoke, fire, and rupture/explosion. There are numerous types of abuse situations that can result in an overtemperature inducing a thermal runaway, such as over-heating, over-charged, short circuit and mechanical shock. On the cell level, the thermal runaway response during abuse conditions depends e.g. on cell chemistry, cell design, size of battery and abuse type. In order to avoid large consequences, it is important that a thermal runaway in a single Li-ion cell does not propagate to involve several modules or a complete battery pack. Therefore, it is crucial to investigate the Li-ion battery thermal runaway process with accurately monitoring and predicting temperature dynamics during thermal propagation, and implement some effective methods during the Li-ion battery fire to improve its fire safety.